THE SHALLOWS IS a no-fuss, heart-stopping rush of unapologetic B movie excitement that once again confirms: if you must swim, stick to a pool.

It’s a simple enough tale: a young woman (Blake Lively: The Story of Adeline; Cafe Society)  – abandoned by her friend – journeys to a beautiful and deserted beach (supposedly in Mexico, but actually filmed in Australia) to surf and experience the place in homage to her dead mother. There are a couple of other surfers there, who, as the sun begins to set, leave her alone…alone in a paradisical place, with its swelling sea, its increasingly infrequent waves and, hidden beneath the beauty of it all, the mother of all killer sharks.

We’ve all been trained by Spielberg to fear the sight of legs dangling below the waterline; that image of absolute innocent vulnerability. It’s a fear that director Jaume Collet-Serra (Run All Night + several of Liam Neeson’s vengeance movies) takes full advantage of, as the single surfer on a lonely sea with an angry shark soon enough have their first bloody encounter.

From this point on, with just a few gratuitous filaments of back story to break up (and increase) the tension, it’s woman – stranded on a shard of rock, fast sinking under a rising tide – versus shark. About a hundred yards away, bobbing and swaying in the heaving sea is a warning buoy. As the waters rise, can she get there before the shark gets to her? 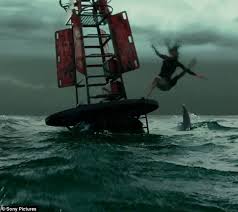 Fortunately, the woman is a medical student who knows how to suture a shark bite with earrings (it’s probably a course option at medical school). No matter. Between the shark bite, blades of flesh ripping coral and glowing jellyfish stings, the shark seems to have all the cards stacked in its favour.

You know who’s going to win! But Collet-Serra’s spare, brilliant directing and the thoroughly convincing agony of Bake Lively (frankly, a lot more convincing than Leonardo’s Revenant) make this ninety minute duel in the sea absolutely absorbing and compelling fun. Lively’s wordless, wounded stoic determination is as watchably engaging a solo performance as Tom Hanks’ castaway or Will Smith’s I am Legend

The movie is a master class of B movie structuring. It begins with a shocker of an image just to grab our attention. From this point on, Collet-Serra layers his simple plot line without an irrelevant scene: the driver who gets her to the beach at the beginning, the two fellow surfers, even a wounded seagull all slot perfectly into place to lead us to the thrilling (and slightly nonsensical, but who’s complaining?) denouement.

It’s a B movie, so don’t look for too much heavy thinking. Just this: when the locals tell you, “there are no sharks in these waters”, go somewhere else