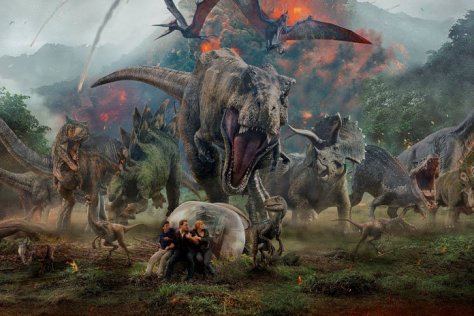 It seems churlish to talk about humans in this uber animal movie. But I’ll do so, if only fleetingly: on a human level (judged by behavior that has some semblance to reality) this movie makes no sense. There were numerous WTF moments that writers Colin Trevorrow (Jurassic World) and Derek Connolly (Kong: Skull Island) were, seemingly, just too lazy to worry about. The impulse seemed always to “get to the action” and minimize motivation, common sense etc. After all, it’s difficult enough trying to tell the same story twice with the same actors and a tick box of “must have” franchise tropes (the sadistic big game hunter who dies nastily, the evil rich genius, the endangered kid, stampeding dinosaurs, dinosaur wrangling etc. though sadly without John Williams’s music) and still try to seem original.

That said, the fundamental premise of dinosaur chaos as an expression of human hubris and greed gone feral, remains alive and well and, despite it all, pretty damn exciting.

The original cute pair, Owen Grady (Chris Pratt) and Claire Dearing (Bryce Dallas Howard), along with a fleeting glimpse of Dr. Ian Malcolm (Jeff Goldblum), are reunited through some vague and entirely meaningless premise to return to Isla Nublar. Their mission, like Noah’s, is the rescue of as many species of dinosaur as they can from an impending volcanic eruption (predicted by better vulcanologists than there are either in Hawaii or Guatemala). Except… there are more sinister moves afoot, which include the creation of a weaponised super Dino: a sort of raptor/T Rex chomp fusion.

After a slow beginning where the characters pretend to yield to irresistible motivations, once the chomping begins and the volcano explodes, the action becomes non-stop. And, despite the repetitions from the original Jurassic World, itself an imitation of Jurassic Park with its own multiple imitations and iterations, there are some stunning hold-your-breath set pieces. Spaniard J.A. Bayona who gave us the tremendously convincing “The Impossible” (about the 2004 tsunami in Thailand) gives full vent to his sense of delirious mayhem in an extended peek-a-boo chase between humans and animals in a vast multi storied (and anarchically destroyed) mansion. Finally, all that dangerous science, crooked oligarchs and villainous hench-men come crashing down beneath the fury of Jurassic de-extinction. 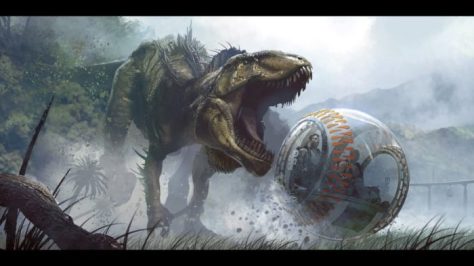 And what was once a contained amusement park threat (spoiler alert) is now unleashed roaring into an unsuspecting world. JW3 is probably already in the planning stage.
The next time only the Avengers can save the world.